Table tennis is an extremely popular game worldwide. It was invented in England in the early part of the 20th century and has grown in popularity ever since. Originally known as ping-pong (a name that’s still popular today), it was renamed table tennis in 1921.

Classified as a sport, table tennis offers many benefits, which is why joining a table tennis club is a great idea. In this post, we’ll go over some of those benefits. 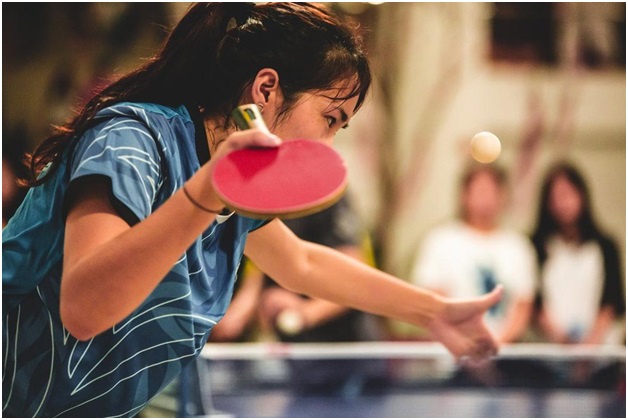 There are not many things you can do that will improve your eye/hand coordination like table tennis does. It’s a fast-moving sport that really puts your reflexes to the test. For this reason, your reflexes will be sharpened exponentially as well, the more often you play.

Coordination improvement doesn’t just stop with the eyes and hands either, as footwork plays a pivotal role in the game. Players must be light on their feet and be able to move left and right, forward and backwards in the blink of an eye.

Any form of movement is exercise, and while players may not be moving great distances in a game of table tennis, there is still loads of movement going on. Fast matches can be quite aerobic as well.

A lot of jumping around takes place when playing the game, so if you play a number of games consecutively, you really are getting quite a good fat-burning workout. It’s also beneficial for the heart and lungs and exercise increases the release of feel-good endorphins in the brain.

It’s a well-known fact that the more a person exercises, the better they feel mentally as well as physically, and when you perform a fat burning type of routine like table tennis gives you, your body continues to burn calories even when you’re resting. This is due to the exercise speeding up the metabolism.

Any type of social activity can lead to making new acquaintances and friends. When you join a table tennis club, you’ll be meeting and mixing with a group who shares the same love for the game and who likely enjoy sports in general.

Chances are high that you’ll make some cool new friends from the experience, people that you may find you have other things in common with and form a new social circle.

Likewise, if you’ve just moved to a new area and don’t yet know anyone, getting involved in a table tennis club is a fantastic and easy way to be introduced to new people.

#4 – Playing a Sport Is a Great Stress Reliever

Let’s say you have a day job that stresses you out a bit, but you get to play some table tennis at night at your local table tennis club. This is a really good way to unwind after a hard day at work. It’ll leave you feeling calm and relaxed and more at peace with things.

Any form of sport or physical activity is good at relieving stress and table tennis is no different. After a few games, your mind will be clear and ready to take on the next challenge.

#5 – Take Things Up a Notch and Play Competitions

Once your skills have improved, you can take competition to the next level by joining table tennis tournaments. Often some cool prizes are up for grabs, and your game will improve as you find yourself faced with players who have superior skills.

On a competition level, the game can become even more fun. Yes, there’s more pressure, but there’s nothing quite like the feeling of improving or possibly even winning the tournament.

How To Find a Table Tennis Club Near You

It’s a great sport and well worth getting involved in.