Meta: When we talk the greatest of footballers in history, there are only two names: Pele and Diego Maradona, let’s learn more about the latter with this article

Football is, without a doubt, the King of Sports. With this kind of clout, it is only natural that there are so many great players throughout its history. However, whenever we want to debate about who can be the greatest of all times, there are only two names.

Yes I am talking about the Brazilian that they call King of Football, Pele, and Maradona, El Pibe de Oro. However, for Argentines, Maradona is not just some sports hero, that man is almost revered as a divine figure. 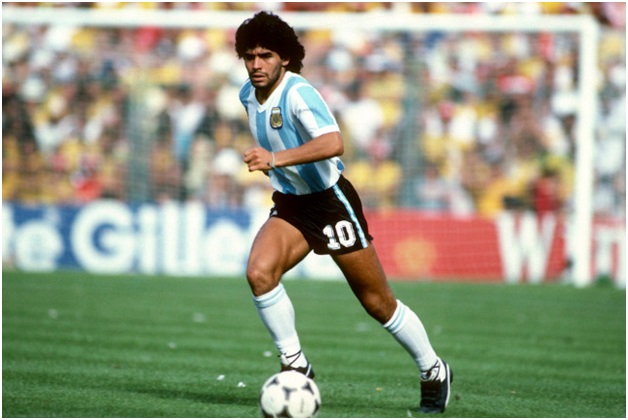 For the people of a country surviving many frustrations socially and numerous dictatorships, El Diego was a symbol for hope.

Today, let’s focus more on his incredible life as well as career.

The Early Life, Argentinos, And Boca

Maradona, born Diego Armando Maradona on October 30th, 1960, grew up in the poor parts of Villa Fiorito, Buenos Aires. On his third birthday, he has gifted a ball from his cousin, which became his dear companion throughout his life.

Even as a small child, Maradona had shown an exceptional kind of talent. At eight years old, young Diego went on trials for Argentinos Juniors. Due to the unbelievable tricks, he showed during the trials, they had to check his ID for his age.

Before he could play for the main team, his prodigy status had already become well-known. People were patiently waiting for the day he could finally show them his real worth.

Finally, Maradona officially debuted for the Argentinos Juniors main team at 15, the youngest ever throughout the Primera’s history. He spent a total of five years there, making 116 goals after 166 games. In addition, this is also where he met his soon-to-be wife, Claudia Villafañe.

When the contract was over, there was a multitude of incredible offers shooting straight for Maradona. Among them, there was River Plate, who offered a humongous amount of cash. However, staying true to his dream from childhood, Maradona chose to partner with Boca Juniors, his old childhood heroes.

Playing only one single season at Boca, Diego made sure that it will be an incredible one. He made 28 goals after 40 games, leading the team to one Primera Division title. Due to the immense talent that he showed during this run, Barcelona made a world record transfer offer, $7.3 million.

He soon demonstrated that the money did not go to waste. On June 26th, 1983, Maradona became the first-ever Barca footballer to get a standing ovation from Real Madrid supporters. However, this peak didn’t last, as due to injury, illness, and controversial incidents, his time at Barca became quite difficult.

First of all, he got hepatitis, then Andoni Goikoetxea almost jeopardized his whole career by breaking his ankle. Things didn’t end there, as the 84 seasons saw a chaotic, violent fight in the Copa del Rey 1984 final. Of course, Maradona is at the center of this fight.

The brawl played out directly before King Juan Carlos of Spain along with 100000 fans at the Bernabéu stadium. Needless to say, this incident effectively sealed Maradona’s fate at Barcelona, becoming the last time he wore its uniform.

At the end of 1984, Maradona was transferred to Serie A’s Napoli with another world record transfer fee, $10.48 million.

In his presentation, Maradona was applauded by 75000 followers, all of whom believed that their saviors have appeared. After all, teams in the north or the center of the country were dominating the Italian football scene. Of course, this was before the arrival of El Diego.

Not letting them down, Maradona truly attained his peak performance at Napoli, inheriting the captain Giuseppe Bruscolotti’s armband. He elevated the club to its most successful era throughout history, winning their first-ever Serie A title in 1987. This is also the very first time a club in Italy’s southern parts wins the title.

Not stopping there, El Diego once again helped the club to another Serie A title in 1990. Other honors of this time included one Coppa Italia title in 1987, the 1989 UEFA Cup, the 1990 Italian Supercup.

Despite playing primarily as a creative attacking midfielder, he was also Serie A’s best scorer throughout the 87-88 season. Maradona also set another record, the most goals of all times for Napoli, which was only broken in 2017.

His final years at Napoli would see increasing issues in his personal life, affecting greatly his efficiency on the field. There was the worsening of his cocaine addiction, he was missing practices and games, citing “stress”. Maradona was also under heavy fire for an illegitimate son as well as alleged connections to the Camorra.

Finally, a 15-month ban after he failed a cocaine drug test was the last straw that broke the camel’s back. Napoli had no other option but to let him go and Maradona left the club in disgrace. However, the club still respects him greatly, retiring the jersey number 10.

Some months after starting for Argentinos Juniors, Maradona made his official debut for Argentina’s national team against Hungary in 1977. On June 2nd, 1979 Maradona finally made his first goal for the team over Scotland in a 3-1 victory.

From then on, he had always played a vital role in the strategies of Argentina’s main team. This showed clearly during the 86 World Cup, where Maradona captained the team to complete victory. He was there every single minute of every single game, making five goals alongside five assists.

Of those goals, there are two that are forever imprinted in our minds. The first one gave birth to the name “Hand of God” while the second one is the epitome of skill.

The Best Footballer Ever?

Diego Maradona has become what we consider as a living legend. There is no other player currently that can compete against him for the title “best ever”, aside from Pele. Even when we take Pele into consideration, one can still make a strong case for Maradona.