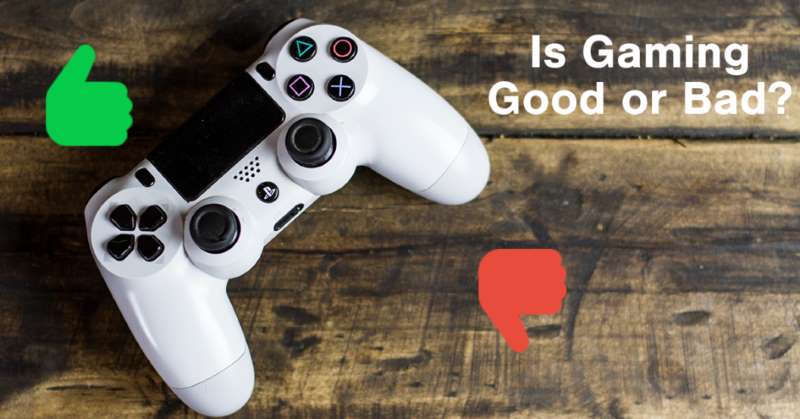 Many people love video games, and we don’t just mean children. Millions of adults out there enjoy playing a bout of video games daily. Especially in this era where many of us are confined to our homes, having some video game time can help with a little bit of escapism. But is gaming good for you or not?

Stress relief, or not?

One of the main reasons people tend to play video games is that people use them for escapism. In this way, these games are attempting to relieve you or your stress by helping you to focus on something completely different. By diving into a new world, you can leave current troubles behind, albeit temporarily. So, does that mean coming out of the game might make you more stressed?

Of course, the type of game you play will have a major part to play on how stressed you become. A cute game of Animal Crossing is less likely to trigger stress responses when compared to playing something like Doom or Fortnite. Studies have shown that during gaming, players are likely to sweat more, have a range of emotional responses and an elevated heart rate. But, no increased blood pressure was recorded, indicating these stress levels are not traumatic, and you can look here for more information.

Gaming can improve your skills

Another interesting thing about gaming is that there are arguments that say it can improve some of your skills. While using a console to manipulate your characters, it’s argued that you can improve your hand-eye coordination which can be useful outside of the gaming world.

Additionally, gaming has shown that it can improve your problem-solving skills – many games, though they may seem over the top and all about action, do require the gamer to figure out problems which get parts of the brain firing. It can also encourage the processing of information on another level.

While many people claim that gaming can be rather isolating and antisocial, this is not necessarily true at all. When it comes to kids, this is something to consider as they should be encouraged to go out and socialize with friends in person. For adults, this can be the perfect way of socializing, particularly now we can’t go and meet people.

Online gaming allows people to come together from around the world. These games are fully interactive, meaning players can make friends and even incorporate them and interact with them within the game.

However, there are a couple of downsides too. The biggest one of these is physical exercise. While your brain may be engaging at many levels, you’re still sitting down for extended periods. If the outdoors is not for you, then it could be time to change out Grand Theft Auto for a bout of Wii Tennis to get your body moving. Without enough exercise, you can get overweight, which will cause you problems down the line, no matter how much fun you’re having right now.

Start Streaming! If you love being social and love gaming, you could start streaming, which is where you show people your skills when it comes to gaming. There is a whole market of people out there that love watching people play video games on popular streaming platforms like Twitch, YouTube, and even Facebook. You don’t have to be at the pro level or even play a competitive game; a lot of people love watching others play single-player games so you can take your time. Gain enough followers and you could even make it a side hustle and earn some money!

Show off your creativity and show people what you can do. Make videos of your gameplay and upload them onto YouTube or Facebook. If you know a thing or two about video editing, this could come in handy to make your videos more engaging and entertaining. Building and simulation games can also be fun to show off; games like Minecraft, The Sims, or City Skylines are good examples as they allow you to show off your unique builds. Again, if you manage to gain enough subscribers, you could even turn this into a career with sponsorship deals and becoming a YouTube partner.

Some researchers at Columbia University discovered that gaming is also beneficial to children, that is, of course, as long as it is in moderation. Playing video games for an hour or so, whether supervised or playing together, led to children having a higher intellect and competence in school. There is a scale, however, as if children are left to play games for hours without moderation, this won’t have a negative effect on their intellect, but it could possibly affect their social behavior. The results showed that as long as gaming is moderated, encouraging gaming with either friends or family could boost positive brain growth and help kids develop their social functions.

A study carried out by the BMJ (British Medical Journal) found that a game called Sparx which was primarily developed to help people with depression actually yielded better results than counseling. The game itself presented a self-directed learning format which allows depressed children and teens who may not be socially equipped to express what they are feeling to an adult, or may have been holding back, to express their feelings with no chance of judgment in the video game. Video games are developed to immerse the player into their world, so if Sparx is able to encourage healthy coping strategies with proven techniques in a fun and unique way, this could possibly be more effective than therapy. Of course, it won’t be the same for everybody, but it is definitely worth some more research and development.

There are many health benefits to video games that have been well-researched; however, many people simply aren’t aware of the benefits outside of having fun. So, is gaming good for you? Well, let’s just say they definitely do more good than bad, contrary to what some may believe.