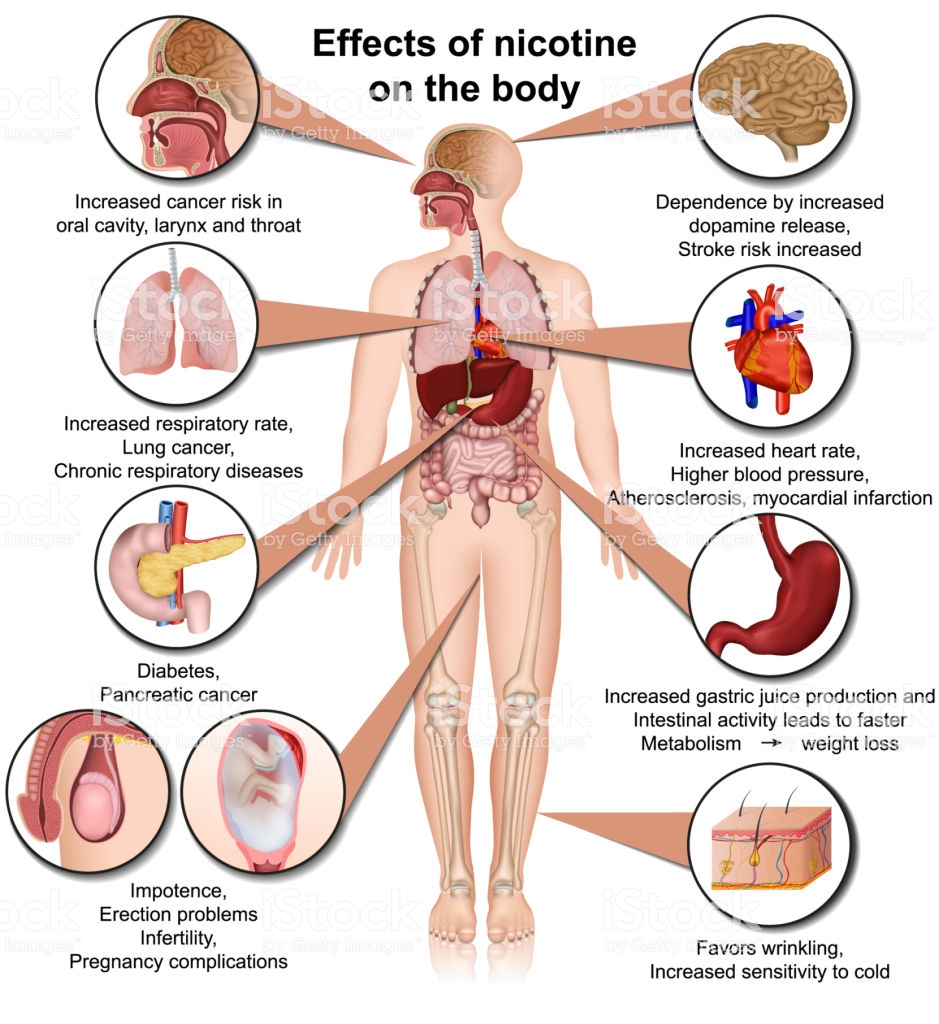 When you inhale a cigarette or put a snuff under your lip, nicotine is released into your bloodstream. Nicotine travels quickly all the way up to your brain, causing the brain to start a chain reaction that affects the entire body.

Nicotine is the substance in tobacco that gives a stimulating effect and makes you addicted. When you quit smoking or snuffing, you’ll feel a consuming craving after nicotine.

Nicotine is extracted from leaves of the tobacco plant. In small amounts, nicotine is stimulating for humans making them addicts. Nicotine is actually the plant’s way of protecting itself against insects and consumed in large portions it’s toxic for humans.

Nicotine acts through receptors in the body, and by enhancing signal molecules in the brain. The process can lead to a stimulating effect on the central nervous system. You may feel relaxed and content, but at the same time more productive because of your heart rate increasing.

Nicotine has an immediate effect on blood pressure, heart rate, and blood sugar. For smokers, the effect is long term. For snuffers, the effects last for as long as the snuff is in their mouth. There have been to few studies to prove an increased risk of cardiovascular disease or any long-term effect, like smokers risk.

Utilizes the Reward Center in the Brain

The brain’s reward center is stimulated by the signal substance dopamine. A high level of dopamine enhances feelings of joy and well-being. Often described as our natural intoxicant, dopamine is the same substance that is released when we are in love, getting a hug, eating food, having sex, or doing something else enjoyable.

Nicotine exploits this reward system by increasing dopamine levels. This implants a lasting memory that smoking/snuffing is something good that should be repeated.

Nicotine changes the brain’s perception of what’s normal. Someone who is addicted to nicotine will need a constant supply to maintain normal brain function. After a while, the nicotine-tolerance increases, and nicotine levels must be increased to maintain a high level of dopamine.

A person who does not sniff or smoke may experience that the body reacts strongly when nicotine is released. Excessive nicotine can cause the user to feel nauseous, unwell, and dizzy. You can also experience heart palpitations and headaches and vomit.

What Happens When You’re Not Getting Nicotine

When you quit smoking or snuffing, you may experience many of the same symptoms as a person going through nicotine chock. They may include:

The first three days are usually the worst because the body craves nicotine. After 2-4 weeks, withdrawal is usually gone. If you feel like it’s too hard or taking too long, there are a number of medicaments designed to relieve symptoms of withdrawal.

If you get pregnant, it’s important that you stop smoking or snuffing completely. You should also be absent for as long as you breastfeed.

The nicotine causes the blood vessels in the placenta and uterus to contract. This is very unfortunate because the fetus won’t get adequate nutrition and oxygen. As long as the baby is in your belly, it’s completely dependent on the quality of the mother’s blood vessels to develop normally.

As a result of this, pregnant women should not use nicotine replacements such as patches, chewing gum, or oral sprays as they contain nicotine. The best advice is to consult with your doctor if you are pregnant and having a hard time quitting smoking or snuffing.