Studies have shown that around 73% of businesses invest in web design for their website to stand out among many others. A lot of firms hire the so-called “web companies”, which include both Web Development Companies and Web Design Companies. However, these two terms are often mistaken for the same, but they are not.

“When making the balance on designers and developers, the “left-brained” (logical) vs “right-brained” (imaginative) comparison is occasionally made.” – we can read on a webpage called career foundry. However, some studies have shown that there is no such thing as a dominant part of the brain. There is no rule that will tell you if you’ll be better in web development or web designing. 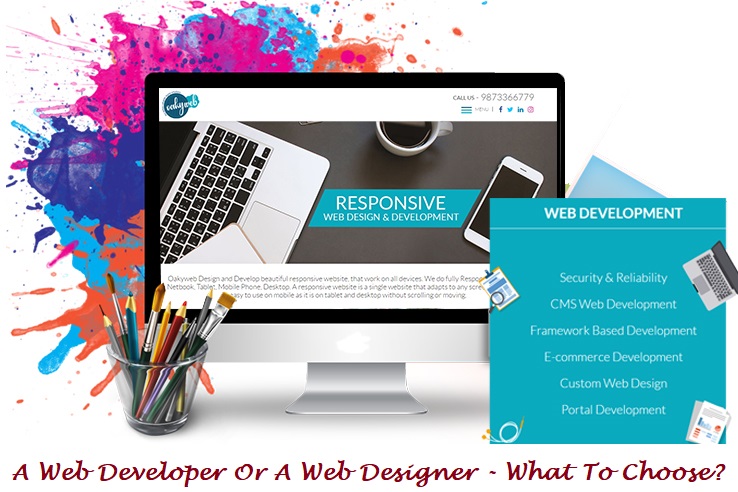 So how to decide? Here are some differences between these two jobs – they might help you in making up your mind.

To fully understand the difference between a web developer and a web designer, let’s pretend that a website is like a house. In this case, the web designers would behave as architects – their job is to create the blueprint. They create the layout of the website. Web developers are like a building crew – they transform the blueprint into a real house using specific tools. They build the website.

Web designers take care of the visual and aesthetic part of creating a website, while web developers focus on its functionality. Web designers also think about how the user will navigate the site and design in a way that will make them see the right content at the right time, and will make it easier to absorb it.

When it comes to what tools both of these people use, there is a visible difference. A web designer will use graphic design software, as they are not required to know programming languages (however the knowledge of it will definitely help). Among the most used, you can find Adobe Photoshop, Illustrator, Inkscape, and GIMP.

Web developer, on the other hand, has to know how the programming languages like HTML, CSS or Javascript work. Among the programs they use, you are most likely to find text editors, version control, and command-line interface to create what will later become a website.

A job in web development is quite lucrative. The annual income of a web developer is around $75,000 if we are talking about the US and approximately $57,000 for a web designer. However, it doesn’t mean that you can’t earn more or less than that. Everything depends on your skills, how much experience you have, and the location. There are locations like Wigan, where customers are willing to pay more for creative designs.

A good portfolio is important for both web developers and web designers – it allows them to show their skills and past experience to future employers. However, both of them use different tools to create them.

A web designer is more likely to use websites that will allow them to show their creativity and graphic design abilities like dribble or Behance, while web developer will opt for websites that will give them a chance to showcase their coding skills like GitHub. Some also choose to create their personal website that will fully show their competence without the interference of other people.

Web designers are responsible for an aesthetic part of the website, just like an architect is responsible for a blueprint. Web developers are the ones that, like the building crew, create the real thing – be it a website or a house. They are not the same, but both of them work symbiotically.

The differences between these jobs are visible, for example, in the tools they are using, in the salaries they receive, and in the way both of them create their portfolios.