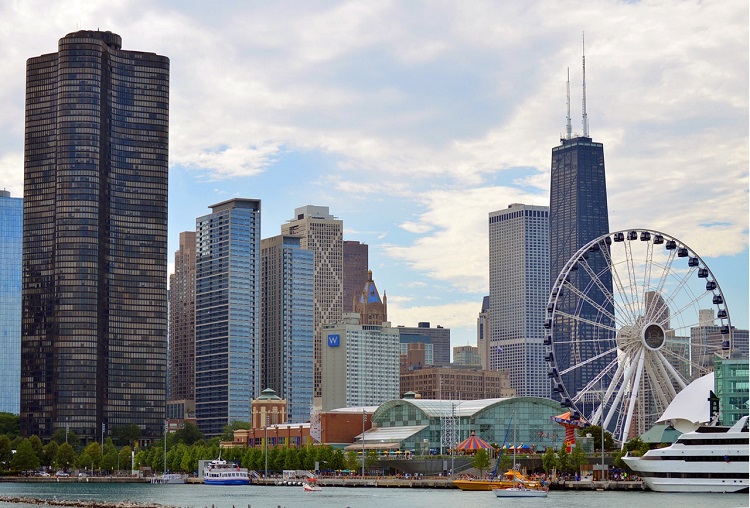 The five places selected represent different landforms in our United States. There is the:

The Outer Banks of North Carolina

There is no guarantee that what you see in one visit will be the same for the following visit due to dynamic processes of beach evolution that follow violent storms that affect the Outer Banks. At least three main capes are associated with the Outer Banks (if not more): Cape Hatteras, Cape Lookout, and Cape Fear.

The beaches are wonderful places for collecting shells and shell fragments. Be sure to have your camera with you for the plethora of photo-shots that will be available. For example, sand and grasses against windbreak fence lines and sunrises, lighthouses and Atlantic Ocean horizon shots, and storm clouds swirling above waves thrashing along the shorelines. While you’re there, you can shop around for some OBX merch to bring home as a souvenir.

You know your place in the world when you are in the Sequoia National Park. Although humans may be high on the food chain, in the scope of things in the world we are but a speck. While driving into the park you pass several redwoods, because the northern coast of California has quite a few of them. However, when you enter the Park, there is a silence and awe that befalls you when you see so many magnificent trees in one area.

Just knowing that some of the trees are upwards of 3,000 years old makes you want to tread lightly in this environment. That makes the older trees some of the oldest living organisms on Earth. They are the most massive trees in existence. The average height ranges between 164 – 249 feet tall and trunk diameter averages are about 26 feet. On the extreme end, the largest tree was recorded to be 311 feet tall and it had a trunk diameter of 56 feet.

If you ever have the opportunity to see these wonderful trees, do not pass it up. It will be a humbling experience.

If you ever want to feel the power of Mother Earth in one location, take a trip to New York and visit Niagara Falls. Be prepared to shout a lot, because the thundering waters are hard to talk over. Being near the falls gives one a feeling of powerlessness, of sheer vulnerability for being close to something so powerful.

There is a ship that offers tours out in the waters of Niagara Falls called the Maid of the Mist.

Petersburg is referred to as the “little town that is built on a muskeg.” And it is built on muskeg. Homes can be purchased relatively cheap, but pilings to place under a home can be upwards of $50,000 or more to keep the foundation stable. Muskegs (a type of wetland) are also referred to as peat bogs.

The little town is not a big tourist attraction yet, but if you want to see life in a fishing town as it really is, Petersburg is the place to visit. The fisherman’s yards are wonderful with all their gear strung out in the trees. Fresh seafood is sold on the docks by fisherman that come in. Popular among what is sold is halibut, cod, crab, and salmon when it is in season.

If you are into photography, there are some beautiful sites to be seen. Eagles are always flying around the cannery’s there, normally 50 to 100 at a time. It is a site to behold. Black bears can be seen peeking their heads up through the thick vegetation, deer are so comfortable there they just peruse and eat the flowers in everyone’s gardens, and on occasion, there’s been a moose or two. The seals are not at all intimidated by the public. They jump up on the docks and lounge for much of the day. Don’t forget to look into the water and get pictures of the seaweed floating there. It makes for beautiful photos next to boats.

Right across from Petersburg (which is on Mitkof Island) is Kupreanof Island and Petersburg Mountain that can be hiked. It’s a 3-mile hike with much of it a vertical climb. The view from the top is breathtaking, as long as the clouds don’t block you from seeing everything.

The only way to get to Petersburg is by boat or by plane. There are two flights per day, weather permitting; one going north and one going south. Tour boats and ferries are popular ways of getting to Petersburg.

It’s hard to fathom what happened to scour so much land as is done in the Grand Canyons. Like other places mentioned in this post, looking at the Grand Canyon lets you know how powerful the forces of Mother Nature are and how time is truly a relative measure. Even if we live to be 100 years old, it is nothing in the scale of things that occur on this earth. Again, we are but a speck in time.

The North and South Rim are both breathtaking. To truly appreciate the Grand Canyon it is recommended to take a tour so you can get the stories about how it was formed, tales about its discovery, and even learning about different tribes that have settled in and around the Canyon.

Read a few photography courses about capturing depth in photos before going. It’s hard to capture the 3D beauty in a 2D photograph, but this place is definitely a must-see at least once in a lifetime.