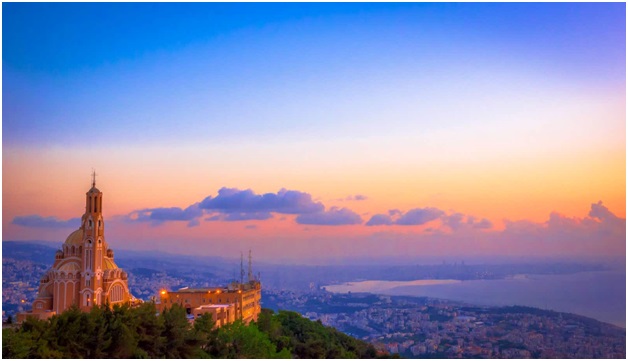 Lebanon is a beautiful country of rich traditions, legends, and deep-rooted history. But it is a great place for love, as it has plenty of romantic spots that every loving couple should visit.

In the area of ​​Bostan al-Sheikh, not far from Sidon, there are the ruins of one of the many sanctuaries that once spread out on the territory of Phenicia – the temple of Eshmun, a healing god identical to the Greek Asclepius. Legend has it that Eshmun, a mere mortal hunter, became the object of the irrepressible love of the goddess Astarte. Desperate to avoid persecution, he committed suicide by releasing all his blood. But the goddess resurrected him, making him a deity of the immortality of nature (In mythology, Eshmun is also responsible for the alternation of the seasons). The temple was erected under the ruler Eshmunazar the Second, named after the deity, and existed until the 4th century BC until it collapsed as a result of a major earthquake. Like other Phoenician temples, the temple of Eshmun was once an open-air platform, in the center of which was the house of the god.

Today, 75 caves that exist in Lebanon were discovered. For example, Afka Grotto, where Ibrahim, the largest river in Lebanon, once bearing the name Adonis, begins and creates a network of intricate labyrinths and large rooms. An underground river flows through one of the many passages and breaks down into the valley, through the main entrance of Afka, located in the mountains. In winter, you can’t get into the grotto, it is completely flooded, but in the summer there are many hours of excursions to underground galleries and tunnels. Another well-known Lebanese cave system, Jeita, is located 20 km north of Beirut. Its caves are located on two levels, the lower of which can be seen only by traveling by boat. Jeita is a very popular tourist destination. There are 4 cable cars here and a small train, and near the entrance to the upper galleries, there is a theater showing films about these caves.

If you want to know how to not be bored in a relationship, then one of the ways to make it more exciting is to visit the cedar reserves of Lebanon. Once, the entire territory of today’s Lebanon was covered with cedar forests. But bad ecology and people did their job – cedar groves almost completely ceased to exist. At the beginning of the last century, Lebanese cedar, which in ancient times served as the main source of income from export operations, was simply burned as fuel for steam locomotives moving between Damascus and Aley. The Savior of the symbol of Lebanon was the Maronite patriarchs, who took custody of a small grove near the city of Bsharri. Today, this protected grove, called “Big Cedars,” has about three hundred trees and is considered the oldest and most beautiful in the country.

One of the most popular places for tourists is Lebanon’s main winery – Chateau Ksara, located in the Beqaa Valley. Founded by Jesuit monks back in 1857, Lebanon’s most famous wine company has become famous throughout the world and has even become the winner of an international festival in Paris. Chateau Ksara received its name from the fortress, that was located here during the Crusades. This winery did not stop functioning even in the difficult period for Lebanon at the beginning of the 20th century, and today it exports its products to more than 30 countries around the world. Of the seven million bottles produced in Lebanon, three million are exported. About 70 thousand tourists annually visit Chateau Ksar.

Baalbek is a real ghost town, once known as one of the sacred places of the Earth. But history and time are inexorable – the city has sunk into oblivion, leaving no trace even in textbooks on archeology. Scientists practically do not know anything about the oldest period in the history of the city, except that during the time of Emperor Augustus, it became a Roman colony. What has come down to our time is the ruins of the great temple of the god Jupiter, erected by Antoninus Pius and destroyed by wars, time, and a powerful earthquake of 1759. The ruins of Baalbek today are staggering: many mysterious and incomprehensible things have been preserved in them. It is incomprehensible why there are square holes in limestone blocks, reaching a depth of 30 cm and stretching along the entire perimeter of the stone base, and traces of machining are visible on the sides of these blocks. The largest block of Baalbek, created ostensibly by hand without the use of any progressive technology, weighs about a thousand tons and is 23 meters long, 5.5 wide, and 4.55 meters high.